Allred Pike Jr. was elected to the San Carlos Tribal Council in February 2015 for the election year of 2014. Prior to being elected, Allred was an Investigator at the San Carlos Apache Tribe’s Public Defender’s Office. He graduated from Eastern Arizona College with an AA degree in Criminal Justice.

Allred’s focus for serving his community was to always advocate for a safe and drug-free environment. His long-term goals consist of economic growth with affordable housing and job creation for all Tribal members. 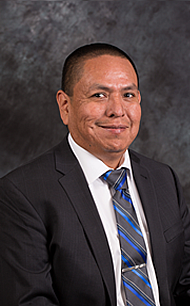