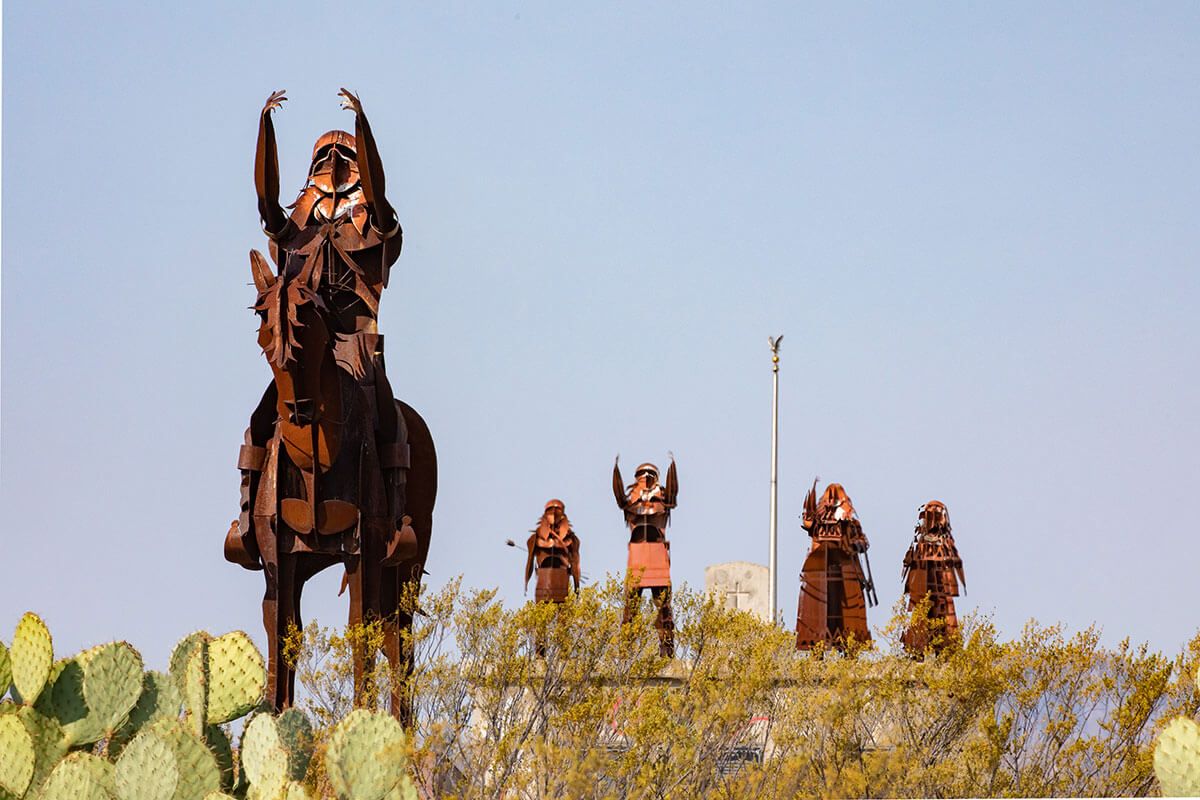 In the late sixteenth century, the Western Apaches made contact with Spanish explorers who moved northward and interrupted ancient trade connections. But the arrival of the American military and settlers in the 1820s and 1830s posed the most serious threat to the traditional way of Apache life. When Apache men lost access to their land and options to feed their people, raiding, which had been a sport, became a necessity. Raids erupted into war over land and cattle. The U.S. military moved in to protect the settlers and some Apaches agreed to work as scouts for the military. Highly valued by the U.S., the scouts were viewed as traitors by other Apaches, creating a schism that has never completely healed.
Enraged that the government wasn’t protecting the settlers, in 1871 a group of men from Tucson staged a massacre of Apache women and children at Camp Grant. In response, the U.S. issued its Peace Policy, which required resettlement of all Apaches onto a reservation. Four areas were set aside: Cibecue to house the northern bands of White Mountain Tribe; Camp Verde to contain Northern and Southern Tonto and Aravaipa; Ojo Caliente in Western New Mexico for the Warm Springs band of the Chiricahua and Camp Grant for San Carlos Apache.
San Carlos Apache Reservation
President U.S. Grant established the San Carlos Apache Reservation on December 14, 1872 as the homeland for San Carlos Apache people. That order designated Camp San Carlos, at the confluence of the Gila and San Carlos Rivers, as headquarters for the Indian agency. Two years later, however, the Department of Interior launched a “program of removal” to imprison all Western Apaches at San Carlos. General George Crook, who was the top military official in that area, objected, predicting that concentrating so many hostile bands together would cause serious problems. By 1875, 4,000 Apache, Mojave and Yavapai and Chiracahua Apaches, including Geronimo, were jammed into “Hell’s Forty Acres”, as the San Carlos camp became known. Deplorable conditions persisted for many years until the government began allowing non-San Carlos Apaches to begin returning to their homelands.
Tribal government v. federal government
In 1924, without consulting the Tribe, Congress authorized construction of Coolidge Dam and withdrew land below 2,535 feet from the San Carlos reservation. That decision deprived the San Carlos Apache people of their water source and required them to relocate. A decade later, the Tribe became a federal corporation with a Tribal Council government. Still, the federal government reduced the size of the San Carlos reservation six times, whenever minerals or other resources were found.
Despite being deprived of their land and water and natural resources, the San Carlos Apache are proud they survived horrific conditions as prisoners of war, never negotiated with the government, and never surrendered. Because of that “removal program”, tribal membership is a melting pot of descendants of the White Mountain, Cibecue, Coyotero, Mimbres, Chiricahua, Pinal, Apache Peaks, Aravaipa, Tonto, Mogollon and Chilecon bands.