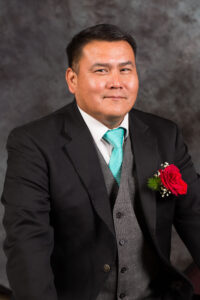 Councilman Kitcheyan with his expertise in investment strategies has secured over $60 million dollars in grants, contracts, and funding for the Bylas community and over $50 million for the San Carlos Apache Tribe. Having been one of the main individuals spear-heading the San Carlos Apache Healthcare Corporation & renovating Clarence Wesley Health Clinic takeover from Indian Health Service, sharing extensive knowledge on 638 Contract policies, procedures and bylaws with Tribal Council and colleagues alike.

As part of the management team of the Bylas District Economic Enterprise Board, Mr. Kitcheyan’s vision is rehabilitating, the Bylas community, advocating for funding, revitalizing the community’s economy. To mention a few more projects, Mr. Kitcheyan over saw construction of 15 new homes under the HUD program, completion of the new Older Adult Center Facility, a strong advocate for education constructing Mt. Turnbull Elementary School, Mt. Turnbull Academy, construction of the new Boys & Girls Club building, and on-going home renovations in the community. Forwardness for a better community of infrastructure, economic development, and care for all members in the Bylas community has always been at the top of Councilman Kitcheyan’s agenda as a Public Official.

At home, Councilman Kitcheyan is active in his role as a member at the Bylas 2nd Miracle Church. More recent, he supports his wife and their family helping in their business venture of “Nutrition with a Native Twist” aiding in the betterment of health in the community.